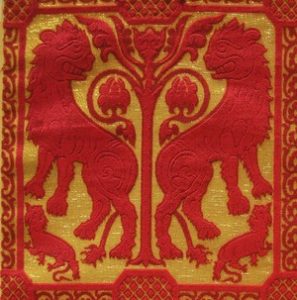 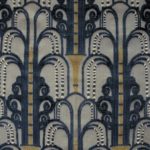 Velvet was born in the Orient in the 13th century, subsequently developing in Italy in the 14th century and achieving its excellence in the cities of Florence, Venice, Lucca and Genoa. The key feature of velvet lies in its very name, which derives from “vellum”, as in fact, it features a thick pelt on its upper side.
Looms for velvet are characterised by the presence of two warps: a lower one to create the fabric “base” and one for the “pelt”.

The creation of velvet occurs by inserting rods below the pelt warp.These rods can be of two kinds. A round cross-section, which will create uncut or curly velvet once removed by the weaver, or a square section with a groove in the centre; in this case the rod is not removed, but the weaver inserts a blade into the grooves and cuts the pelt-warp threads, to create cut velvet. “Soprarizzo” or “soprariccio” velvet is the result of a blend of these two techniques, and provides the possibility of creating a three-dimensional effect in the fabric.